On August 1, 1987 the Holy Father chose OUR school to be the only catholic school on his Los Angeles visit!  Students in grades 6-8 were selected to meet with the Holy Father and they began formulating the questions they wanted to ask. Cardinal Mahoney visited a couple of times prior to the event to walk them through it all.

“September 16, 1987 was finally here. Everyone looked absolutely perfect in their uniforms! We had been told that we needed to be out of the building by late morning so that they could do a security sweep. How on earth would we keep the children occupied until the Holy Father’s arrival mid-afternoon? After an extended lunch time, we had our first school Mass of the year. Of course, the helicopters were doing practice landings in the parking lot (or something) during Mass. Needless to say, both the distraction level and the energy in the air were running high!

The students exited church and walked up to the 8th St. gate where they entered the yard through a metal detector. A canopy was set up by the convent next to school. When the helicopter landed, a limo took the Holy Father around the block to the convent for a few private moments with Mrs. Reagan. Then our two special visitors walked up to the classroom where 21 adolescents eagerly awaited meeting their very own ‘faith hero.'”

She continued, “As principal, I had the privilege of being in the room with them while they interacted with Pope John Paul II.  Their questions were astute, and I remember being impressed that 11-13 year olds could be so profound. The Holy Father was so gentle, gracious and genuine with them.  When the interview time ended (it was about 40 minutes or so), he began to walk around the circle of students, handing each of them a rosary. Halfway through the group, he began giving each student a hug, so of course, to make all things equal, he went back to the first students to hug them!”

“Then 2 students escorted the Holy Father and Mrs. Reagan outside where the entire rest of the school was waiting. To this day, I can hear them screaming and cheering and I can see the enormous joy-filled smiles on their faces. It still gives me goose bumps! He addressed the students briefly, speaking of the importance of Catholic education and a bit of the legacy of Catholic schools in the U.S. We presented him with flowers and a book of letters from the students, promising prayers and good acts.”

As he turned to leave, the middle school students he had just spent time with were standing nearby. He stopped again to embrace them. One student, Lorena Vega, clung to him, sobbing tears of joy and profound emotion. (I never had thought about children crying tears of joy before, but these truly were. To this day, I believe that moment has continued to impact her life.)”

“His words about the mission of Catholic education are emblazoned on a bronze plaque that hangs in our main hallway, “Catholic schools continue to provide not only a vision of life’s purpose but a gateway to life’s opportunities.”

Who knew, in that time, and in that space, that we would be walking in the footsteps of a true saint each day we come on campus. At the end of prayer during morning assembly, we pray: 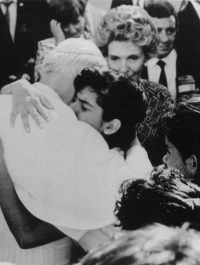 Email Us »
Map and Directions »